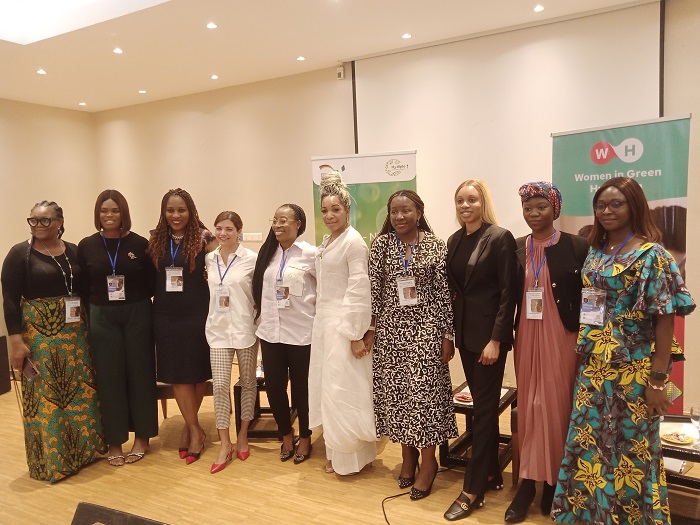 Cross section of African Women in Energy at the conference for Green Hydrogen and renewables in Lagos.

…Encourage the use of solar power across the value chain which includes agriculture and industries.

Traditional fossil fuel exporting countries are seeking how to leverage the change in demand patterns that are being brought about by the energy transition and as a momentum to decarbonize their economies. While considering this future economy, green hydrogen and its derivatives have been identified to be fuels of the future towards securing economic stability for fossil fuel exporting countries and pathways to their net-zero targets. This Energy transition presents a unique opportunity for women to be at the forefront of decision and development of low carbon energy sources like green hydrogen towards the net zero emission targets while identifying opportunities and businesses for women across the energy sector in Africa.

With the aim to accelerate the dialogue on energy transition and especially encourage female inclusion in Nigeria, the German-Nigerian Hydrogen Office financed by the Federal Foreign Office (AA) and implemented by the Deutsche Gesellschaft für Internationale Zusammenarbeit (GIZ), with the partnership between Women in Green Hydrogen Network and the African Energy Chamber held the Networking Brunch on African Women for the Energy Transition on Friday, 24th June 2022.

According to International Renewable Energy Agency (IRENA), the energy transition is a pathway toward transformation of the global energy sector from fossil to low carbon fuels by the second half of this century. It has been identified that green hydrogen which requires renewable energy would prompt African countries in the emerging global hydrogen market especially to Europe in the near decades.

For the transition to be successful, reports have shown that over 18 million jobs must be created – and to ensure sustainability and inclusion. Over 50 % of the global population are females, but only 32 % of women are working in the renewable energy sector according to data provided by the Women in Green Hydrogen.

The inaugural Networking Brunch welcomed a diverse range of representatives in the renewable energy sector including women in early-mid level, businesswomen and energy sector female veterans. These shared their insights on the energy transition and challenges faced as well as business opportunities. A goodwill message was shared by Ruchi Soni, Programme Manager at SEforALL who leads the initiative on Results-based Financing and Universal Energy Facility.

The keynote speaker for the event, Dr. Rita Okoroafor, a former principal reservoir engineer and currently at Stanford University, introduced the hydrogen processes and emphasized, that “diversity improves the bottom line “there’s no just transition where we do not include the voice of women”. She strongly urged African woman to take hold of opportunities in academia, while understanding the business and commercial activities of the global energy transition.

The event was graced by two all women panel; the first session addressed the energy security and Nigeria preparedness for it.

Grace Orife, CEO Adelaar Energy shared insights on commercial impact of the acclaimed Decade of Gas and necessary financing for the energy transition.

She stated further that the Federal Government has designated 2030 for the attainment of Decade of Gas for Nigeria. As an energy transition, Nigeria made her stand known on gas.

Orife added that the country has huge gas reserves that can boost its power sector with an enormous opportunity to make electricity available for its citizens. Gas has also created access for Liquefied Petroleum Gas (LPG), thus becoming a change player for other sectors in the value chain such as agriculture and fertilizers.

According to her, gas encourages access on power and opportunities for the country’s vision of Decade of Gas. Some gas project have been funded by banks under Nigeria Content Development.

Rosario Osobase, Head – Commercial, Tenaris Nigeria dived into the complexities of exporting and how Nigeria can identify global strengths.

Osobase was of the view that climate change and global warming are threats occasioned by severe impact of Russia/Ukraine war which has brought untold hardship on people in terms of economy and energy security. Inflation has risen across the globe with looming food crisis.

She advocated for green hydrogen which is significant to attain net zero emission. There must be clear regulatory frame work for sustainability of energy with visionary leaders especially in Africa.

Osobase spoke about REPowerEU which is a plan for EU to eliminate dependency on Russian fossils presents an opportunity for Africa. EU has taken aggressive path to lower carbon foot print. Africa must buy its European counterpart idea by identifying a clear value chain where players and operators can operate. Hydrogen should be enhanced since it has been useful to heavy industries. Nigeria has Parks in some south-south states which could be leveraged with hydrogen.

The challenges of energy security cannot be overemphasised with regards to increase in oil prices occasioned by the ongoing war in Europe.  This has led to multiplier effect on food prices and raw materials going off the roof heading towards recession across the globe.

Africa is viewed as a poor continent due to lack of industrialisation and state-of- the technology. There is extreme poverty as LPG also known as cooking gas has skyrocketed.

She urged Africa to look forward like the Middle East and Asia for other sources of energy.

Explaining the disadvantages of hydrogen, the Tenaris boss made it clear that it is a good source of energy but is costlier than gas. The Environmental Social and Governance (ESG) security is a concern with regards to Research and Development (R&D) since the technology exists in Nigeria, there is need for improvement.

Hydrogen is highly inflammable hence storage facilities should be kept safe not to be unbridled.

The Head – German-Nigerian Hydrogen Office; Gina Lagunes poised why this was an adequate time for Nigeria as a fossil fuel exporting country to explore green hydrogen in a sustainable manner ahead of global energy security.

Why exploring hydrogen in future, the demand for fossil fuel will be reduced by 2050.

Therefore, Nigeria should diversify to hydrogen for cleaner energy, “Green hydrogen is the last mile to the journey.”

Lagunes disclosed that by 2050, green hydrogen will cover up to 12% world wide because it is going to be the main component. Hence countries should look for means of supply.

The hydrogen expert made it known that Europe is scouting for alternative suppliers due to Russia/Ukraine war which calls for improvement towards the use of hydrogen.

Hydrogen does not compete with gas for energy security with long time development to its credit. It also creates room for business opportunities and investments. Capacity building to attain net zero emission should be enhanced. Green energy is not replacing renewable because it is not new in Nigeria.

The session was moderated by Sharon Kaburuk, Advisor, Capacity Development & Private Sector Collaboration at the Nigerian Energy Support Programme (NESP) – a implemented by: technical assistance programme co-funded by the European Union and the German Federal Ministry for Economic Cooperation and Development (BMZ) and implemented by GIZ in collaboration with the Federal Ministry of Power.

As with the necessity to create jobs ahead of the energy transition; the second session addressed the businesses and opportunities. At the panel Sandra Chukwudozie, CEO Salpha Energy, recently announced as Forbes Africa 30Under-30 trailblazers for 2022, described her work as a mission towards ending energy poverty.

Although in deploying renewal energy to rural areas, Chukwudozie revealed that the company had issues because they are unbanked. This calls for the use of artificial intelligence and other means to assist the people.

The vision of Salpha Energy is to provide solar power across the value chain which includes agriculture and industries. Introducing solar energy projects to community leaders working along with non-governmental organisations to meet the aspirations of the people and avert energy poverty.

Also represented at the panel was Lawyer and Partner at ENR Advisory, Jumoke Fajemirokun who has handled complex commercial transactions within the energy, mining and infrastructure sectors.

Fajemirokun added that for hydrogen project to be funded in Nigeria, there must be viable regulatory framework identifying the value chain and existing contract ensuring that the sector is bankable.

The last panellist was Jocelyn Nwaokenneya, CFO, Ladol. She reflected about the logistic, cargo and freight transportation and the diverse prospects for Nigeria to widen its borders.

Nwaokenneya pointed out that about 900 million people around the globe do not have access to cooking gas resorting to other unconventional means of energy.

She said the risk in doing business in Nigeria is huge but admitted that the country has opportunities in gas which could service other African countries.

There is need to encourage the energy sector to invest in environmentally aligned projects on green energy because there is no clear project description while the government has to intervened by increasing green bound to reduce C02 emissions.

The panel was moderated by Zafirah Sulaiman, Advisor, Enabling Environment for RE and EE investment at NESP.

Hydrogen Office will continue through various capacity building engagements towards highlighting the need for diversity and inclusion on dialogues on green hydrogen towards a low carbon future.

Creating existing infrastructure for hydrogen and getting necessary data that will help investors and policy makers to implement viable projects.