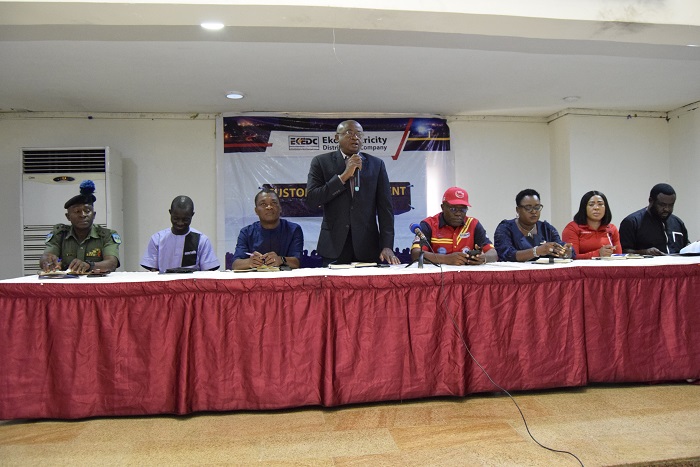 Eko Electricity Distribution Company (EKEDC) on Thursday solicited the support of customers and stakeholders in tackling energy theft and vandalism within its network.

Dr. Tinuade Sanda, Chief Executive Officer, EKEDC, made the appeal during a customer engagement forum organised by the company in Lagos.

The customers at the forum were drawn from various areas under Apapa District, including Ajengunle, Badia, Ajeromi, Amukoko and Apapa.

Sanda, who was represented by the company’s Chief Finance Officer, Joseph Esenwa, said the essence of the meeting was to interact with customers directly on issues of concern and address them instantly.

She added that the company was losing an average of N3 billion to vandalism within the company’s operation.

She said despite huge investment in power infrastructure by EKEDC, vandalisation of equipment was still on the high side.

She said activities of vandals were crippling power distribution to the company’s esteemed customers.

“Recently, we reported cases of stolen cables, damaged transformers, and other network infrastructure,” she said, decrying the spate of vandalism within its network, which adversely affected power distribution to customers.

She explained that the economic power and livelihood of the customers had been disrupted due to vandalism.

She appealed to customers to jealously guard electrical installations within their environments to avoid being plunged into unexpected darkness.

“We implore all residents and customers to report any act suspected to be vandalism to the nearest Police Station, Civil Defence and the Department of State Service,” said Sanda.

According to her, the alarming cases of illegal connections, meter bypass, apathy to payment of electricity bills and vandalism have been on a steady rise recently.

She narrated instances where customers using prepaid meters connived with electricians to bypass meters with the aim of evading payment for energy consumed.

“While we are also soliciting the support of communities to assist EKEDC in curbing these illegal activities, the provision of improved and stable electricity supply is a collective responsibility that requires collaboration of stakeholders.

“As the ricocheting effect will not only impede progress in the power sector and affect revenue but will also erode the quality of electricity supply to our customers,” Sanda explained.

She warned of dire sanctions for offenders, saying it was a punishable offence under Section 94(3) of the EPSRA Act 2005 and culprits were liable to imprisonment for five to seven years.

The CEO reiterated the company’s commitment to curbing energy theft, vandalism and other illegalities perpetrated by unscrupulous elements within its network.

On metering, Sanda said the company had commenced effective metering through the Meter Asset Provider (MAP) scheme where meters were installed within 10 working days after confirmation of payment.

She urged customers to key into the MAP scheme as a way of addressing estimated billings.

On infrastructure development, the EKEDC boss said the company had bought over 150 transformers to improve supply and had commenced installation.

She added that the company had trained over 300 lines men to resume in various locations to boost operational efficiency.

Mr Gibraltar Njowusi, the Secretary, Apapa Government Council, commended the company for its prompt response to faults, while urging the company to support the project on powering street lights.

Njowusi urged EKEDC to support the community it operated from through development of infrastructure as part of its Corporate Social Responsibility.

He said so many companies ought to have been paying willing if supply was available.