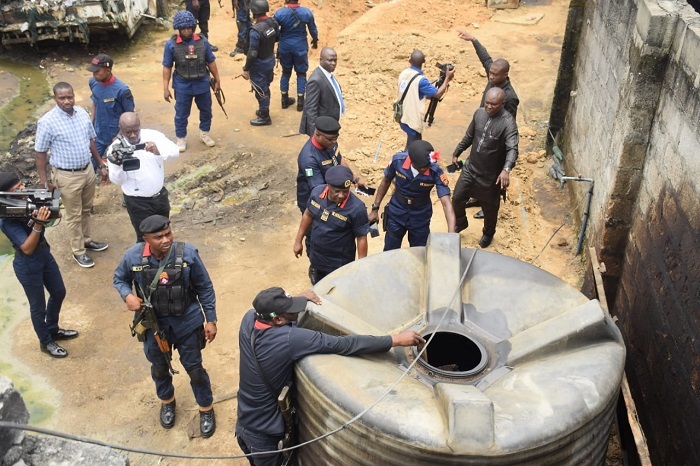 The Nigeria Security and Civil Defence Corps (NSCDC), Rivers State Command has arrested 19 suspects on account of their involvement in oil theft and illegal dealings in petroleum products.

While addressing newsmen at the Command Headquarters of NSCDC in Port Harcourt, the Rivers State Commandant Michael Ogar decried the defiant attitude of oil thieves and those engaging in illegal bunkering activities noting that in spite of the continuous sensitization and relentless war against economic sabotage in the Nation those milking from the Nation’s wealth through illegal oil dealings have blatantly refused to change their ways.

Commandant Ogar maintained that sequel to the reconstitution of a new Antivandal Team of the Command, the Marine and land Patrol operatives has commenced full operations with a renewed vigour, professionalism and tactics in wagging war against the menace of Vandalism of oil pipelines and oil theft in Rivers State.

“As directed by the NSCDC Commandant General, Dr Ahmed Abubakar Audi mni, a marching order was given to the Marine and land operatives to massively arrest pipeline Vandals and illegal oil dealers in the State and this has enhanced our doggedness in the series of arrests made by the Command”.

The Marine team in an all night tactical operations arrested 2 additional suspects named: Ade Monday 27 years and Abiola Gift 29years with One (1) wooden boat, 25 drums (6,250 litres) of illegal refined AGO and One (1) 15 HP outboard engine.

Following a tip off, the Antivandal Unit also uncovered a building used as dump site for storing locally refined AGO along Cornerstone junction in Ogbogoro, Obio Akpo Local Government Area. We discovered an underground Tanker containing unquantified litres of locally refined AGO, a Plastic Tank containing about 3,500 litres of AGO and a Pumping Machine. The entire compound is now under seal and manned  by our personnel while the Command would continue to chase the culprits tiil they are arrested and prosecuted accordingly.

Another building close to Akpos Jetty in Abuloma community in Port Harcourt was also uncovered while the Suspects took to their heels upon sighting the NSCDC operatives; a short green and white colour DAF CF 250 Truck with number plate LAGOS EKY 206 XS laden with illegaly refined AGO and Pumping Machine were recovered as exhibits.

This was followed by the arrest of Ifeanyi Nwauwa 43years along Azikiwe road who was in conveyance of One (1) Gold colour Toyota Camry with number plate ABUJA HX 937 ABC laden with Illegaly refined AGO.

To serve as deterrent to those still getting involved in this unscrupulous and illegitimate business, all the arrested suspects would be charged to court of competent jurisdiction while the Command would do everything possible to unravel, chase and apprehend their sponsors.

The Command will further approach the court with application for forfeitures of both the contents and the mode of conveyance and the proceeds would definitely be remitted in the federal government coffers.

“Let me reiterate our commitment to the war against oil theft and illegal dealings in petroleum products in Rivers State. The perpetrators should either relocate or risk facing the full wrath of the law”.