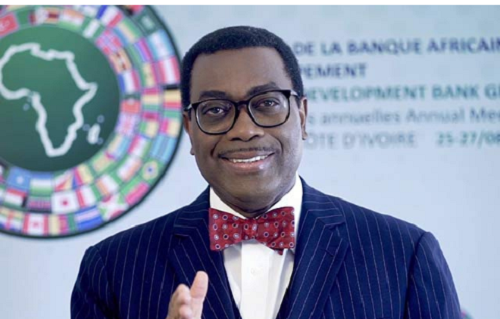 The president of the African Development Bank (AfDB), Akinwunmi Adesina, has criticised Nigeria’s failure to diversify its export base to high-value market products, saying the country has focused more on replacing imports and saving the naira rather than deliberately pursuing wealth creation and value-added manufacturing.

Adesina, who served as Nigeria’s Minister of Agriculture from 2011 to 2015 under the administration of Dr Goodluck Jonathan, said this at the Manufacturers Association of Nigeria (MAN) Annual Adeola Odutola Lecture held in Abuja on Tuesday.

He said the country has failed to position itself for economic growth and achievements, the type attained by developing countries like Vietnam and Malaysia.

“While for decades the share of manufacturing in Nigeria’s GDP, has hovered around 7%, the nation has not been able to extricate itself from the comatose of its industrial manufacturing sector to unleash the fullness of its potential.

“The performance of the manufacturing sector in the past five years have been poor. Between 2015-2017, the sector declined by -1.5%, -4.3% and -0.2%. This is in sharp contrast to the dynamic and rapid performance of manufacturing in Asian countries, such as Singapore, Malaysia and China.

“While Asian countries have focused on the export of manufactured products, Nigeria’s approach has been on import substitution. The manufacturing sector of Nigeria represents only 3% of total revenues from exports, but accounts for 50% of imports in the country. Instead of being forward looking in expanding the share of the manufactured goods in its total export revenue, Nigeria focuses on the model of import substitution.

“Import substitution, while important, is a very restrictive vision. It looks towards survival, instead of looking to create wealth through greater export market and value diversification. The end result is a manufacturing sector that cannot develop nor compete globally, but limits itself to “survival mode, not a “global manufacturing growth mode,” Adesina said.

He said Nigeria must have a greater ambition for its manufacturing sector by integrating and rapidly moving up global and regional value chains in areas of comparative advantage; “by and by driving greater specialisation and competitiveness”.

He also criticised the Federal Government’s policy of limiting access to foreign exchange, rather than expanding the country’s foreign earnings.