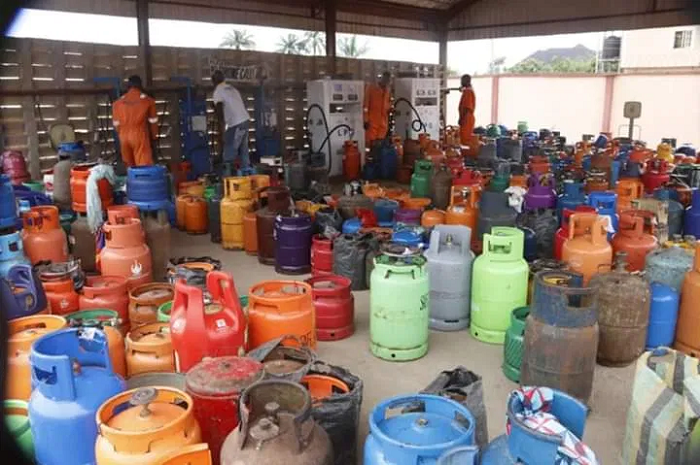 Marketers of Liquefied Petroleum Gas (LPG) also known as cooking gas in Nigeria on Saturday declared that the price of the commodity may hit N10, 000 per 12.5kg before December.

Executive Secretary of National Association of LPG Marketers (NALPGAM), Mr. Bassey Essien, who declared this on the weekly e-Discourse organised by leading Pan-African forum, Platforms Africa, maintained that If the “government does not address the recently introduced import charges and VAT, the price of cooking gas may as well reach N10,000 for a 12.5kg cylinder.”

Platforms Africa is the e-community of intellectuals, policy molders and opinion leaders in continent, a forum being coordinated by award-winning Nigerian journalist, Adeola Yusuf.

Leading the Saturday e-Discourse, Essien said, “The skyrocketing price of gas is our fear and what we are trying to avoid. Early in the year a 20metric ton of gas was selling for below N5m but today same tonnage sell for N10.2m.

“As long as there is that supply shortage, the available quantity and the dynamics of supply-demand will keep pushing the price higher. If government does not address the recently introduced import charges and VAT, the price of cooking gas may as well reach N10, 000 for a 12.5kg cylinder. Today the price has risen to N7, 500 and N8, 000.”

Lamenting poor patronage of NALPGAM by customers due to the high price, Mr. Essien stated that more Nigerians are being forced to return to Coal, Sawdust, kerosene, and other dirty fuel.

“The Association is very concerned with the high cost as many Nigerians are resorting to the use of firewood, charcoal and kerosene to cook and the prices of these cooking energy have suddenly gone up.

“The Association is interfacing with Government, Stakeholders, producers, importers to see how the situation can be arrested, as well as meeting with the Marketers vide moral suasion not to capitalize on the situation and inflict more pains on citizens by increasing the cost of gas in their locations though they are equally expending huge cost to have cooking gas at their locations,” the NALPGAM scribe said.

Asked whether there is any hope in sight, Essien said; “Unfortunately none in sight for now except the supply is increased. NLNG says it has supplied all its production quota into the market and other available sources in-country are still negligible to address the shortfall in supply.

He continued; “The cost of cylinders has been on the gradual rise over the years. We have about 2 cylinder manufacturing plants in the country and all the elements of production are imported, note the import implications.

“The cylinder ownership structure in the country ensures that owners are in charge of their cylinders. Cylinders expire on the 15th year of usage from the manufacturing date. Because of the high replacement cost, consumers buy what they can afford. This has equally encouraged the proliferation of substandard cylinders in circulation.

“Despite the over 180million population of the country, we hardly have up to 10million cylinders in circulation.

“The regulators are working hard to monitor the standard of cylinders coming into the country.

“The progress in cylinder acquisition still needs government input to ensure that the cost of materials for cylinder production get the necessary exemption from duties but however the state of our local currency still remains a major problem,” Essien said.

Team Lead, Platforms Africa, Adeola Yusuf, however, called on the Federal government to wade in and save a lot of Nigerians the pains of paying higher for gas.

“The decade of gas plan and a lot of feats recorded by the Federal government in the gas sector is being threatened by this crisis and no time is better than now for the government to save the ship of its gas achievements from sinking,” he said.