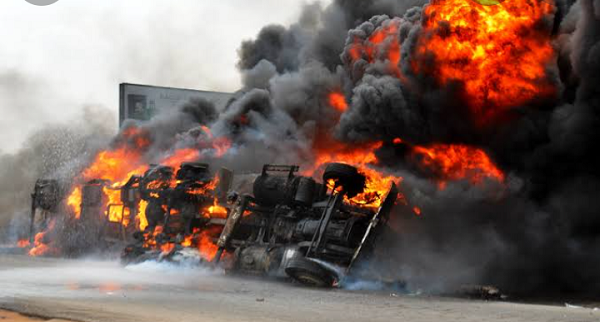 At least five people feared dead and burnt to ashes as a tanker laden with Premium Motor Spirit (PMS), exploded in the early hours of Wednesday, around the Kwakyama area in the Ogere axis, along Lagos-Ibadan Expressway.

While no fewer than five vehicles were equally burnt in the inferno said to have been caused by multiple crashes as a result of wrongful overtaking on the part of the tanker driver.

She said that relevant agencies have been contacted to restore normalcy in the area.

While the FRSC operatives in Ogere were at the scene to ensure free flow of traffic.

Okpe advised motorists to cooperate with the traffic managers while adding that traffic had been diverted to avoid a secondary crash.