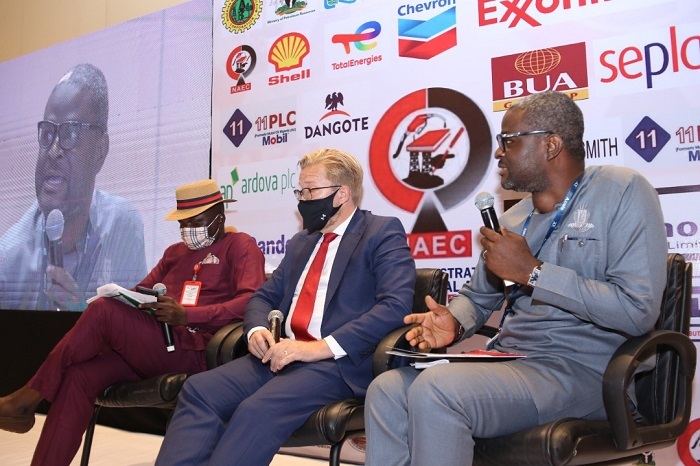 Stakeholders in the energy sector have suggested ways Nigeria can achieve full deregulation in the course of the current energy transition being experienced globally.

They also urged Nigeria not to waste time in keying into the energy transition early stating that the benefits are enormous. Subsidy that is put into petrol they said should be diverted to renewable while also advocating for full deregulation of the power sector.

Deregulation of the downstream of the petroleum industry should be based on local production to boost the economy.

The stakeholders who spoke at a panel of discussants at the 2021 NAEC  Strategic  International Annual  Conference with a theme, PIA: Energy Transition  And the Future of Nigeria’s Oil and Gas stated their own views about the energy transition as it relates to the oil and gas sector of the economy.

In his contribution on having a smooth landing as regards deregulation, Wiebe Boer, Chief Executive Officer of All On, an investment company investing in renewable in Nigeria and funded by Shell, said renewable energy is the future of energy

According to him, “if we spend so much time as a country figuring out this problem on an industry that is currently losing momentum or becoming outdated in the world, fears that we would be left behind in the energy transition as well.”

Boer added that there is a lot of interested parties are coming into the market and this is a big opportunity for Nigeria.

He stated further that some downstream companies with petrol stations are thinking of transforming them from selling Premium Motor Spirit (PMS) to providing services in areas such as renewable so that Nigeria can key in into the drive of renewable.

On how transition can be ensured in the country, Boer asserted that the government should remove subsidy and invest in renewable energy, especially solar and wind so that Nigeria can have access to electricity across the country.

Festus Osifo, President of Petroleum and Natural Gas Association of Nigeria (PENGASSAN) said while organized labour is not opposed to deregulation, it is difficult for the government to transfer its inefficiencies to the masses. He said what has happened over the years is that previous governments are inefficient.

According to him, it is inefficiency that is making the refineries not to work today. “If the refineries were working I don’t think that the labour organizations would oppose deregulation”.  He said mid-nineties, the direction of labour has been to the government why refineries are not fixed. So that the foreign component that goes into the costing would be eliminated.

“Just imagine today, people working in refineries are Nigerians, you will pay them in Naira. So when the dollar is appreciated against the Naira, at the end of the day, the manpower is stabilized. The cost of labour is in Naira and not in dollars. So the only thing you now price in dollar is the cost of crude oil.”

He said what the organized labour told the government is to fix the refineries, when the refineries are working it would support deregulation and it should be based on local production.

He said that there has been trust deficit that has existed between the government and people over the years.

If the privatization of the power sector has been done in Germany, or South Africa, it would have been successful, but since they sold them to their cohorts the exercise has been a failure. After selling the Generation Companies (GenCos) and Distribution Companies (Discos) the government ended up lending taxpayer’s money to run the enterprise which were grossly undervalued.

Osifo pointed out that PENGASSAN is supporting deregulation but it must be based on local production.

Adding his views on deregulation, Adeola Yusuf, said lack of trust has been the reason why people are not supporting government and not communicating with the people accordingly.