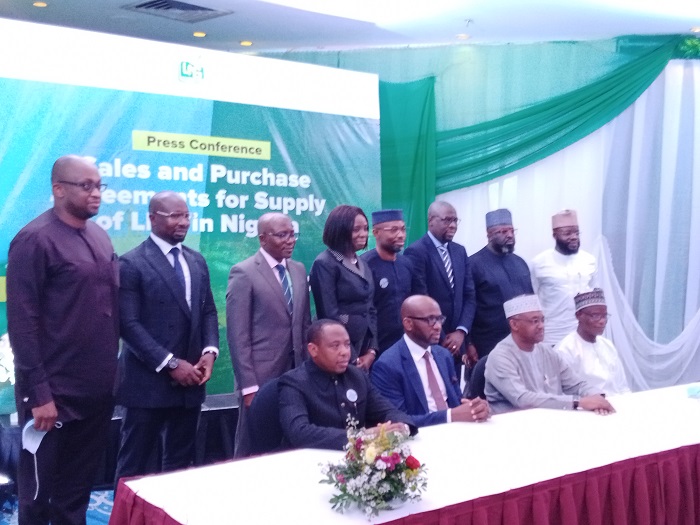 …off-takers to retain gas in-country for domestic use

The Managing Director and Chief Executive Officer of Nigeria Liquefied Natural Gas (NLNG), Tony Attah, made it known to journalists that the company remains a major influencer in the domestic LPG sector. Presently, the gas company has dedicated 450ktpa of LPG to the market and its focus is to support the use of cleaner energy to protect citizens and environment from hazards posed by other cooking fuels by encouraging the use of cooking gas in Nigeria.

The NLNG MD, said as part of the “company’s commitment as a corporate entity, to unlocking gas utilization is now backed by the execution of Sales and Purchase Agreements (SPAs) to supply 1.1 Million Tonnes Per Annum (MTPA) of LNG on DES basis to Asiko Power Limited, Bridport Energy Limited and Gas-Plus Synergy Limited. The SPAs will facilitate the project execution and development of infrastructure led by off-takers to aid LNG delivery into the domestic market.”

According to Attah, the execution of these SPAs follows a Domestic LNG (DLNG) Workshop which was held in November 2019 to stress test the delivery model with industry stakeholders and a series of engagements to identify suitable actors to co-create the initiative and stimulate market interest for potential off-takers.

He commended NLNG Board of Directors and Shareholders for demonstration of faith in the Decade of Gas vision, and commitment to the actualization of that vision.

Attah pointed out that Department of Petroleum Resources (DPR), stakeholders and corporate entities have played critical role in gas development.

“This is just the beginning, and our individual and collective efforts will be needed to make this journey a success.

“With Nigeria’s enormous gas reserves, I am not in doubt that with the right drive from the government and the support of corporate organizations, we as a nation can stand with our head held high to be counted among major players. The government has demonstrated its readiness to take the gas sector to the next level by declaring this decade our nation’s Decade of Gas.”

He added that the decade of gas will leverage Nigeria’s gas reserves to accelerate its power generation solutions through Gas-to-Power projects.

“It will be the decade when as a nation we stop reporting deaths from pollution through the use of wood and solid fuels as domestic energy sources.

“It will be the decade for empowering local SMEs to take advantage of the various investment opportunities that the Decade of Gas will attract.”

The NLNG Boss was of the view that the Domestic LNG Scheme and the ongoing Train 7 project with capacity to attract about $10bn in foreign direct investment.

The gas company has plans to expand LPG value chain by increasing supply to the domestic market, guaranteeing LPG supply and enhancing its affordability by enabling development of a value network for a sustainable ecosystem.

He stated further that only a collaborative effort and active participation of all stakeholders will be required for the country to reach the promised land by attaining the dream of economic expansion, industrialisation and improved opportunities.

He urged Nigerians to fly on the wings of gas because it is time for gas to take its place in the country.

Also speaking at the press conference, the Chief Operating Officer (COO) Gas and Power of the Nigerian National Petroleum Corporation (NNPC), Engr. Yusuf Usman, said Nigeria is indeed in a decade of gas and the country has decided to use it as transition and destination point which has been emphasised by the Minister.

According to Usman, gas will be used for energy especially to fill the power need of the country which is huge and it will enhance developmental growth.

Thus, “decade of gas means development, provision of food through fertiliser, enhancement of transportation to give Nigerians alternative to use gas for fuel.”

Usman charged NLNG to promote the decade of gas for export. He applauded the signing of SPAs with off-takers and quest for gas development in the country.

On the aspect of domestic LNG, he told off-takers that it has to remain in-country and should not be exported out of the country, “try as much as possible to make it useful domestically because it is called domestic energy.”

He acknowledged collaboration among stakeholders building pipeline infrastructure in order to ensure steady flow of gas which is an opportunity for NNPC to partner and make up for the shortfalls in transmission system.

Engr. Usman posited that domestic LNG means virtual pipeline which is being embarked upon due to infrastructure deficit.

As a means of development, gas is of immense benefits to other countries, “the AKK pipeline that we are doing, is going to transverse across five cities and each one of them is bigger than the state of Qatar. If gas can bring about what is in Qatar, we are looking forward for gas to bring development to the country.”

The decade of gas in ten years means a significant amount of development for the country with huge investment opportunities. An enabling environment has to be created to meet realities and aspirations.

Usman said reasons for collaboration is that the country wants to get it right without derailing. Policies and implementation will be driven together in order to get it right.

The COO Gas and Power of NNPC, eulogised Attah, who he described as not only an export MD but plays dual role of exportation and domestication of gas.

Usman submitted that the structure of NLNG has become a role model for other companies to follow the success of the gas company. “Everybody wants to copy and today if we want to liberalise, we say we want to do it like NLNG because it has a virile structure that is so good, delivering value and we are all proud of it.”

He appealed to the company that the Bonny-Bodo Road in Rivers State should be completed because it will be a game changer to transport LNG directly from plant to in-country which will reduce gas price and makes the commodity to be flexible for development.

He told the first off-takers to show example so that others will follow. “We need and hope to see execution excellence in whatsoever you do.”