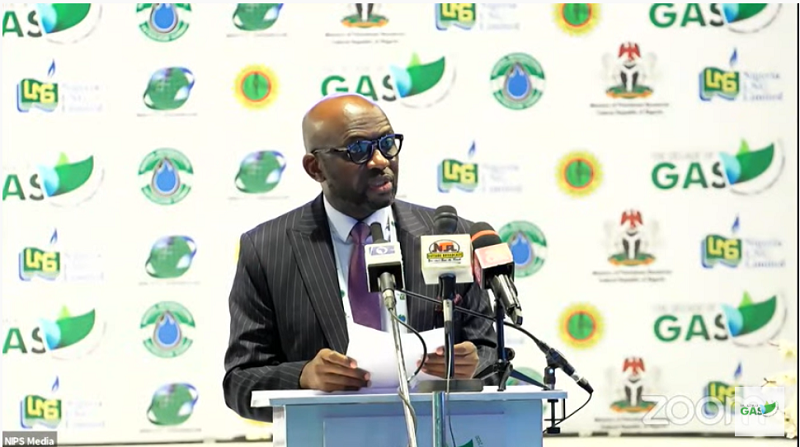 …Train 7 and other investments of comparable magnitude will unlock natural gas utilisation.

Giving his spotlight address at the Nigeria Oil and Gas Exhibition Conference, the Managing Director and Chief Executive Officer, Nigeria Liquefied Natural Gas (NLNG), Mr. Tony Attah, made it known that Nigeria can become the world’s number one nation in gas if deliberate actions are taken to actualise the ambition.

Attah, represented by Mrs. Eyono Fatayi-Williams, General Manager, External Relations and Sustainable Development, said  gas is synonymous to renewables, “it is the transition and destination fuel for immediate future, gas is the future because it is cleaner, it is more abundant in nigeria. The case for more focus has been demonstrated in the passage of the Petroleum Industry Bill (PIB) in the Federal Government decade of gas agenda and this create a unique opportunity and signifies that now is the time for action.”

He said Nigeria with its current gas reserves of 206 trillion cubic feet (tcf) and possible 600 tcf was capable of being the world’s major oil and gas economy once it gets its plan right.

“We must prove the 600 tcf, develop infrastructure and enforce provisions of the gas pricing,” he said.

According to Attah, no country is ready to wait for Nigeria to develop its gas infrastructure as more African countries have emerged in the energy space.

“With our current gas reserves we are ninth in the world with potential to be the first depending on how ambitious we want to be as a nation and the deliberate actions that we must take to actualise this ambition.

“Our gas reserve utilization when compared with two industry players – Australia and Indonesia, should challenge us to go for more market shows.

“No country will wait for us to catch up but will continue with their close ambitions.

“And with the emergence of more African countries such as Mozambique, Senegal and Mauritania in the energy space, we must ensure that our number one position in the continent is not threatened by a market status.

“Qatar and Australia are not resting on their oars but are aggressive about their growth ambitions, and Nigeria should not be different,” Attah said.

He noted that living in a vocal world had made it necessary for the country to take seriously the reality of developing its gas and energy industry.

The NLNG boss further noted that the development of the country’s gas sector would eventually determine its future and its infrastructure.

“The flexibilities, the management space, disruption in the business environment means that our response to this reality is what will determine our future.

“Today, with the volatility in the business place, we must determine the future we want for ourselves as a gas nation.

“We need the understanding to deal with the uncertainty. And we are on that path. We must utilise our gas.”

However, Attah expressed optimism that the country would achieve its set ambition in gas with the inauguration of “Train 7” of its gas project.

Attah said that 12,000 direct jobs, 40,000 indirect jobs and 10 billion dollars Foreign Direct Investment (FDI), were some of the benefits that would follow the “Train 7” gas project upon completion.

This figure, he said, would account for over 50 per cent of the nation’s volume.

Gas will challenge the country to strive and achieve a gas powered economy by 2020 through the decade of gas objective.

The NLNG helsman gave example of Qatar that saw rapid transformation through gas. “Qatar has transformed into a success story purely on the back of gas with a direct impact of GDP per capita. In Nigeria it is also possible.”

“Nigeria needs now to fly on the wing of gas because it has been on the back of oil for far too long.”

The country must pay more attention to gas developpment and be deliberate about how to bring needed change. “We must dream of the future we want and leverage on the possibilities of more volumes with Train 8,  9 and far beyond.”

“We must wake up to the fact that this window of opportunity will not last forever. Hydrogen is another major energy source of the energy mix in the future. We breathe hydrogen for water, hydrogen is taken for energy and oxygen is released to the atmosphere nothing can be more sustainable than this as water is one of the most abundant resources on our planet.”

Speaking further Attah was of the view that hydrogen can be produced from natural gas increasing its relevance in the energy mix of the future.

However, Attah explained that renewable alone cannot meet demand of the growing population in a sustainable manner. Natural gas is therefore the next option and it is a partner to renewables.

He said he does not forsee a future where gas will not be not be relevant. This was why NLNG Train 7 and other investments of comparable magnitude to unlock natural gas utilisation in Nigeria are strategic and must be given utmost priority.

“Gas is readily available in Nigeria, it is cleaner and massisve opportunity  for our dear country. It is a unique opportunity for national transformation. It is time for gas, and the future is in our hands as a nation.”