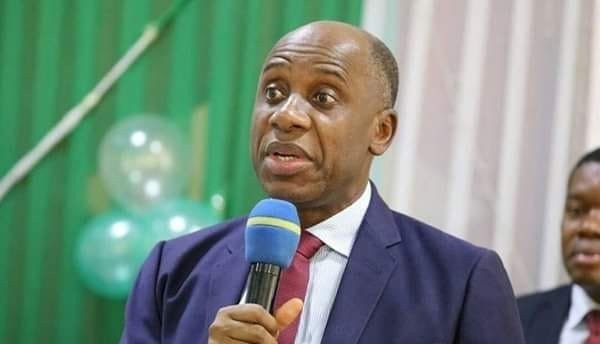 Amaechi resigned his position following President Muhammadu Buhari’s directive that all cabinet members and political appointees vying for elective offices in the elections must resign on or before May 16.

The President’s directive was made known on Wednesday by the Minister of Information and Culture, Alhaji Lai Mohammed, at the end of Wednesday’s Federal Executive Council (FEC) meeting presided over by President Buhari.

Mohammed stressed that this mandate excludes the Vice President, Professor Yemi Osinbajo because he is an elected member of the cabinet.

He affirmed that any amendment or additions to the directive would be disseminated accordingly, adding that if the need arises, the directive might involve political appointees.

It wrote, “Nigeria’s Minister of #Transportation, HM Chibuike R. Amaechi [@ChibuikeAmaechi] has resigned from the Federal Executive Council (FEC) to focus on his Presidential Campaign. Thank you for your service to Nigeria.”

However, there has been no official confirmation of the former Rivers State governor’s resignation by his media team.

Other Ministers that resigned on Wednesday after the presidential directive was issued include Godswill Akpabio (Niger Delta), Ogbonnaya Onu (Science and Technology) and Emeka Nwajiuba (Minister of State, Education).

Meanwhile the fate of the Director-General of the Nigerian Maritime Administration and Safety Agency (NIMASA), Bashir Jamoh, appears to be hanging in the balance.

Jamoh, who is eyeing the governorship seat in Kaduna State, paid N50million for the expression of interest and nomination form of the ruling All Progressives Congress (APC) on Monday.

Since APC has ruled out the possibility of allowing political appointees to participate in its primary elections commencing next week, it remains unclear if Jamoh will resign his position at NIMASA or forgo his governorship ambition.