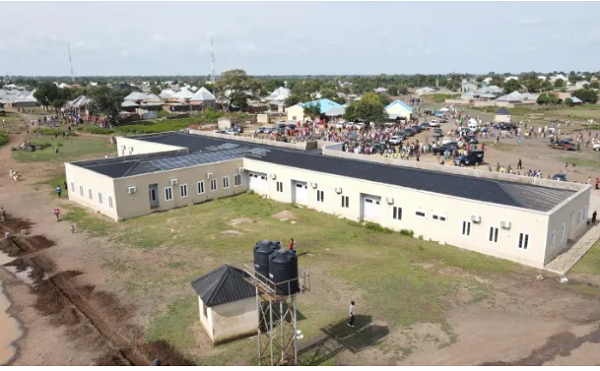 In response to a peaceful roadside demonstration by some residents, Borno State Governor, Professor Babagana Zulum on Thursday, travelled to Miringa town in Biu Local Government Area to open a Medical Centre said to have been funded by Chevron Nigeria Limited (CNL) through collaboration with an “Agbami Group”.

The Medical Centre was said to have been completed and virtually commissioned in October 2020, but had no staff and not put to public use.

On Tuesday, dozens of residents in Miringa town stood by the roadside while Governor Zulum’s convoy was heading to Biu township from Buratai.

Majority of the residents displayed placards urging the Governor to open a Medical Centre that was left unused since 2020 when it was completed.

The Governor came out of his vehicle, interacted with the residents to hear their demand, and thereafter promised to address their need within 48 hours.

Zulum immediately directed the Borno State Ministry of Health and the Special Adviser on Projects Monitoring and Evaluation to relocate a team and mobilize resources for the purpose of assessing the facility, fixing any problems, and putting the centre to public use.

To see things for himself, the Governor was in Miringa, and during his inspection of the Medical Centre, Commissioner of Health and Human Services, Professor Mohammed Arab Alhaji said his team had repaired some leakages found from ceilings and was deploying two nurses to join 41 community health workers deployed from a neighboring healthcare centre.

Arab explained that the Medical Centre was constructed and fully equipped by Chevron through a collaboration with Agbami Group.

He said Chevron’s collaboration had provided a 100 KVA generator, a solar system, and water facilities to the Medical Centre and commissioned it virtually in 2020.

However, residents informed the Governor that the Medical Centre was never put to use since it was completed.

Zulum thanked Chevron and its partner, Agbami Group, for the healthcare intervention in Miringa and directed that medical services were began. He also directed the construction of staff quarters to accommodate medical staff, and make them readily available to meet healthcare needs.

Aside directing structures, Governor Zulum directed the recruitment of medical staff specifically for the donated and opened Medical Centre.

Zulum interacted with temporary staff, assessed their qualification and directed the permanent employment of all those with healthcare qualifications.

The Governor also directed that anyone of them desirous of furthering his or her medical education was going to be supported by Borno State Government provided he or she is returning to Miringa to continue providing healthcare services.