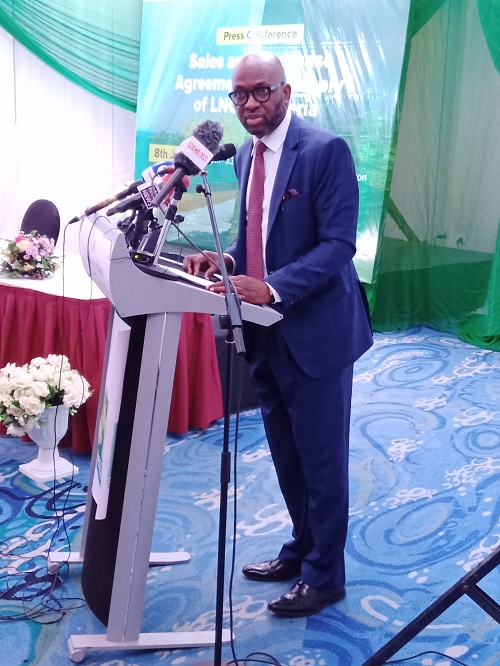 The Managing Director and Chief Executive Officer of the Nigeria Liquefied Natural Gas (NLNG), Mr. Tony Attah, giving his remarks at the Train 7 Ground-breaking ceremony in Bonny Island that shortly after the sixth train was added to the company’s operations in 2007, its aspiration to achieve a seventh train began to take root.

He said various uncertainties delayed the project but its shareholders stuck to their guns and with enormous support from the Federal Government through engagements with the Minister of State for Petroleum Resources, Chief Timipre Sylva, “we are here today to witness the ground-breaking ceremony of our long-awaited Train 7 project.”

The NLNG helmsman stated further: “in Nigeria LNG, we have always distinguished ourselves as development partners with the Government of Nigeria at all levels, and this is a commitment we demonstrate through our sustainable development initiatives and excellent performance which include payment of over US$9 billion in taxes and US$18 billion as dividends to the Federal Government of Nigeria, through NNPC’s 49% shareholding.”

Attah disclosed that through NLNG operations, Nigeria’s gas flaring profile has improved from about 65% which made the country the second gas flaring nation in the world behind Russia to less than 12% improving its standing to 7th position which will improve further with Train 7.

The NLNG Boss spoke on benefits of gas that in 2007, Nigeria LNG responded to a chronic supply shortage of LPG in Nigeria and as at “today, we are committed to supplying up to 450,000 tonnes of LPG to Nigerian market annually. Just last week, we signed our very first Sales and Purchase Agreements (SPAs) with 3 Nigerian Companies to supply over 1million tonnes of LNG to the domestic market annually.”

Attah revealed that NLNG has proven its commitment through numerous Corporate Social Responsibilities (CRS) which includes: the Nigerian Prize for Literature; which is the most prestigious award for literature in Sub-Sahara Africa and the Nigeria Prize for Science; both pitched at $100,000 each.

Undergraduate Scholarship Scheme has benefited over 5000 students in communities and to date the company has sponsored over 75 young Nigerians to top universities in the United Kingdom through its overseas Post-Graduates Scholarship Programme.

Also NLNG continues to support the Bonny Vocational Center (BVC) and its Youth Empowerment Scheme (YES) which collectively train people on the island to become employers of labour themselves.

On health support, NLNG recently signed a MoU to partner with the U.S. Agency for International Development (USAID) and the U.S. Center for Disease Control, pursuant to the elimination and control of malaria on Bonny Island as part of our Bonny Malaria Elimination Project (“BNYMEP”). Over 3000 people have now enrolled in NLNG community health insurance scheme which makes health care more accessible and affordable for people at just N10, 000/year for full insurance coverage.

Attah added that the company is excited about the prospect of linking Bonny Island, to mainland Port Harcourt by road for the very first time in history, with a 38kilometre Bonny Bodo road, valued at N120 billion with NLNG contributing 50% of the project value.

He expressed confidence that the benefits to the people will definitely increase on the back of this Train 7 Project which will expand its capacity by 35% from 22MTPA to 30MTPA.

Expectedly, the Train 7 project will add immense value to the nation, people and the company through the following opportunities; it will stimulate inflow of more than $10billion Foreign Direct Investment to Nigeria as part of the project scope.

Train 7 will create more than12, 000 direct jobs and additional 40,000 indirect construction jobs as a result of the Train 7 project. It will further development of Nigerian local capacity and businesses through the 100% in-country execution of construction works, fabrications and major procurements.

Attah pointed out that this will ultimately increase volume supply to the global market and keep NLNG and the country on top of the suppliers’ chart as world LNG demand grows. There will be more revenue, dividends and taxes to the Federal Government of Nigeria.

“We know that the global energy demand is set to increase by more than 40% by year 2050 and we strongly believe that this project is timely as gas will continue to play a major role as the preferred energy of choice in the current and future energy mix. Gas is readily available in Nigeria, it is cleaner and very affordable; hence a massive opportunity for our dear country. With 206TCF of proven gas reserve and a potential additional 600TCF! I believe that Train 7 will be an inspiration and catalyst for Trains 8, 9, 10 and even to15 in line with the recent declaration of “Decade of Gas” by Mr President.”

The NLNG MD congratulated stakeholders and shareholders who have invested so much confidence in making 14 years dream of Train 7 a reality.

He also thanked staff and workers who have stayed the course with so much tenacity and doggedness.

“As I have said in many fora, Nigeria has ridden on the back of oil for over 50 years, but with Train 7, it is now time to fly on the wings of gas. The stage is set for Train 7! It is time for gas! It is time for Nigeria.”