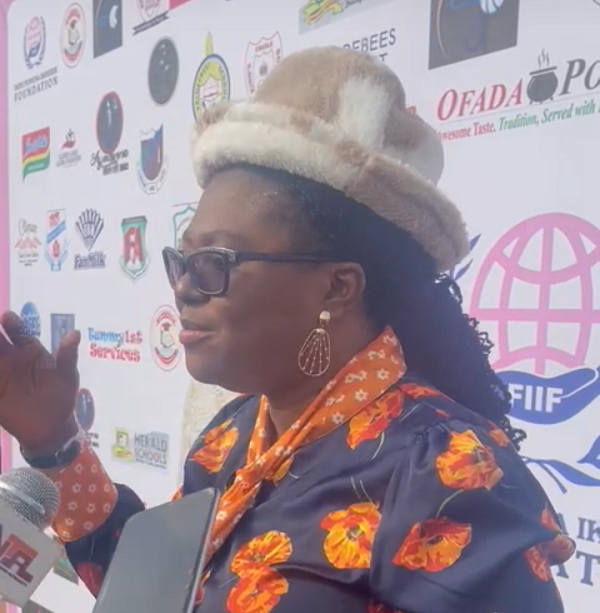 Moral decadence and juvenile delinquencies have pervaded Nigeria and across the globe leading to damnable consequences among young people.

Acknowledging the rot in the society with its negative influence, the Faith Iyowuna Ikekhide Foundation (FIIF) was created to lead young children to the right path of life.

President of FIIF, Mrs. Faith Iyowuna Ikekhide saw the vision of assisting secondary schools students, registered the Foundation and commenced with motivational talks to secondary school assemblies to guide them on how they can desist from social vices capable of derailing their future career.

FIIF started in February and it has created room for empowerment to secondary school children especially those in SSS3. They were empowered on skills acquisition which will keep them busy instead of involving in cyber crime and other societal ills.

At the maiden edition of FIIF, she spoke to FELIX DOUGLAS, Editor of ENERGY FOCUS REPORT and select journalists on why she embarked on the project which is meant to change the orientation of secondary schools children.

How did FIIF came into existence?

I personally was burdened with the fact that so many things were happening in our secondary and primary schools and these children of course will also affect our own children in the society.

As a mother, the Bible says, I arose as a mother in Nigeria to ensure that the destinies of the children are secured. I saw some things on the social media and I didn’t like it because it has to do with ritual killing that ritualists are using children against themselves. I saw it in February on the social media.

Secondly, I also saw the fact that children were having Inter-house sports competition and they were naked. Secondary schools children that are not wise enough to know what they need for themselves especially teenagers.

So, we really need to help our society. I was not comfortable that secondary schools children are doing Inter-house sports competition and were competing going naked. This is why I took up the challenge that these children are not knowledgeable enough if we can from outside help them to settle in life and secure their future. That was the burden on me and we started by February I went out to schools before I discovered that I need to register and get approval. I went to the district where we have been registered. We registered with district 1 that is in control of 99 schools in Lagos State. With that I started giving them motivational talks for 10 minutes in the assemblies once in a week or two weeks with my team.

We have been doing this since February. During my birthday, my husband inaugurated it as a birthday gift for the Foundation.

Subsequently, the Foundation took over the empowerment and everything flows together and we are properly registered in Nigeria and outside the shores of the land. FIIF is also registered in Washington DC. This is how it came to existence. With this we took the first step but it was test running in August during the break in schools. When we went to 12 schools that were approved from the districts, the children were taught. They were empowered on skills acquisition. Such as: hair making, gale tying, doughnuts, tiger nuts and other skills so that these children will have some things to do during the holidays. Instead of involving in cyber crime or be in the streets. The vocation skills were test run during August break when they had their long vocation.

We planned with school principals and they came with their siblings. It was awesome as we decided to take a bigger step and went to the Commissioner for Education office to ensure that we contact him including the Governor’s office to inform them that we want to organise this programme for our children to secure their future and destinies to take them away from the streets.

I also have another ministry and outfit called Rehab Field where we reach out to prostitutes and easy virtue women on the streets at night. Surprisingly, when we go out we discovered that some of them are secondary schools children. We go to the source and help them not to be on the streets. That is why we are here to empower the children with skills acquisition, entrepreneurship and mentoring for Senior Secondary School (SSS3) children. When they graduate from secondary school, they will have something doing while waiting for admission to the tertiary institution or ASUU strike or any factor that can keep them at home. These children will have something that is reasonable which they are doing to fetch them money instead of being in the streets. This is why we are here.

How many schools and students are involved in this programme?

From district 1 of Lagos State Ministry of Education, they gave us 15 schools but when we discovered that some roads are bad, the busses cannot convey them here. We had to reduce it to 11 schools. Although, there are 7 private schools that are here today and we are dealing with all SSS 3 children. Put together, we have 11 government schools, 7 private schools.

How will you link this to UN Sustainable Development Goal?

With what you have seen on ground, we trust God for attention of the UN to assist us because we are still going to do more events.

Next year, it is going to be mega and the district has been informed that by May 2023, we are repeating this programme. This is the maiden edition.

Will there be an award given to schools?

There is no school that is coming first. What we are doing is skills acquisition. Right now you can see the children as they are arriving from their different schools with the Bus Rapid Transport (BRT) buses that we have arranged for them. They are already teaching them decoration, doughnut, gale make-up, tiger nuts and various skills. It is not a competitive event.

Later, we shall bring renowned speakers and resource persons that will talk to the children. It is a hybrid event to ensure the children are well communicated to physically and virtually. Officials of the Lagos State government are present in this event as well.

Do you have funding partners?

Presently, it is self funding from the Chairman to the stakeholders and all of us have participated, I believe when we start up properly, it will be well funded by our partners. Money meant for the Foundation will not be diverted and I believe other people will be comfortable to join us. Indomie, FAN yoghurts, SHOPRITE and other vendors are attending this event.