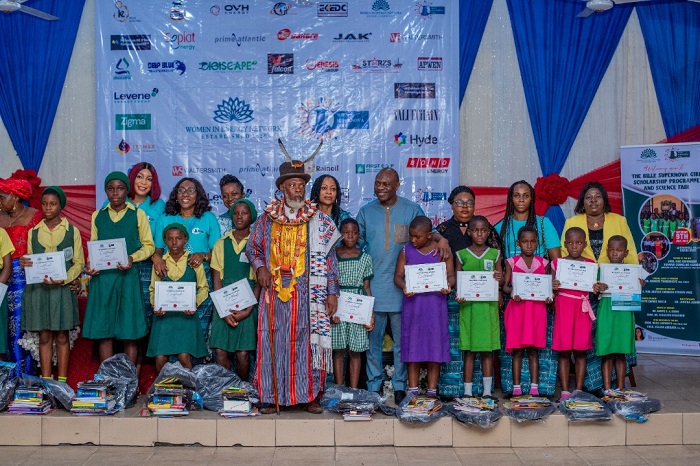 WIEN, an all-female group hosting the platform for professional women playing in the energy industry, gave out scholarships and science education packs to the students in the maiden edition of its Supernova Girl initiative designed to groom young women for roles in the energy and industrial sectors.

Located in the Degema Local Government Area of the state, Bille Kingdom is situated on the west of Bonny Island and south of Port Harcourt. It is made up of 30 settlements with   a population of about 77,000 people, out of which 41,000 are in the Headquarters, Bille Town.

The Supernova Girl Scholarship Programme & Science Fair which was taken deep into the river-rine Bille Kingdom provided forum for WIEN to interact with all critical stakeholders in shaping girl-child education; including traditional rulers, parents, school administrators, teachers and political leaders from Rivers State.

Part of the strategy is to directly address custodians of culture, tradition and education on the need to dismantle such impediments and afford female children to live out their full potentials and express their innate capabilities.

President of WIEN, Engr. Mrs Funmi Ogbue, declared that the aim of the Supernova Girl Scholarship Programme & Science Fair is to support girls in STEM education and provide broader career paths to enable them thrive and also help in the socio-economic development in the country.

Out of the 482 beneficiaries of Bille Supernova Girl event, 16 girls from three categories received WIEN’s scholarship and the rest 486 students received high end education packs for STEM education. School uniforms, sandals, bags and text books were also distributed to students at the event.

Mrs Ogbue stated that the students form the initial batch of beneficiaries while the Bille programme serves as a pilot scheme for future programmes. She said the Supernova Girl initiative would form WIEN’s signature intervention programme in its nationwide STEM education campaigns.

In delivering her address at the Kingdom’s Town Hall, Mrs Ogbue said the Bille Supernova Girl Scholarship Programme and Science Fair was conceived to be a special intervention to ignite passion in young girls “and showcase the socio-economic value and application of STEM in our everyday life.”

“WIEN is confident that early contact with group will indeed spark the desire and ambition of the girl child to take a study path that will get them ready for career in the industrial sector,” she pointed out, adding that in addition to encouraging the education of rural girls in the country the Supernova Girl initiative is also intended to stimulate the thrill and zeal for innovative thinking.

“The goal is to stimulate our children’s innate capacity and inclination to desire science education as part of our overall plan to accelerate the movement towards full optimization of female talents in the country,” she said.

She said that WIEN’s role is to mentor, point the way forward and partner with the future champions to midwife their careers by way of providing learning aids, seminars, scholarships at some points and inspiration.

Ogbue said “the scholarships, dressings, books and instructional materials are the ways WIEN intends to stoke the fire of excellence in our girls in STEM education and motivate them to become greater professionals.”

“We are comfortable that the curriculums that guide primary and secondary school instructions are robustly developed and well implemented. What remains a serious concern however is the poor percentage of female students pursuing science and technical studies,” she stated.

Mrs Ogbue also stressed the need to change the admission criteria for teacher training colleges “and encourage our best talents to go into the teaching profession.” She noted that teachers form very critical “stakeholders in preparing our children for a life in STEM.”

She made it clear that “teacher selection, teacher development and teacher motivation is critical to the success of any meaningful intervention to improve the pipeline of girls in STEM.”

In his remarks, the highly elated monarch, the Agbaniye-jike XVIII, HRM King Igbikingeri Ngwowari Cornelius Herbert, the Amayanabo of Bille Kingdom, who was the father of the day, noted with great delight that Bille is the first in the country to benefit from the Supernova Girl initiative.

He expressed appreciation of his kingdom to WIEN for bringing such a laudable initiative to Bille, saying: “We made several appeals to the oil and gas multinationals to come and do this for us, and severally they ignored us. But now, we are getting it on a platter without having to struggle for it.”

Keynote speaker, Engr. Adokiye Tombomieye, who hails from the community, declared support for the Supernova Girl initiative, adding that he would help WIEN sustain the programme in Bille kingdom.

He stated that the prevailing socio-economic situation in the post pandemic world requires that the people of female gender be given the opportunity to contribute meaningfully to the recovery and growth process along with their male counterparts.

In expressing the confidence that the objectives of the project would be realized for the good of the Bille kingdom and Nigeria in general, Engr Tombomieye thanked WIEN for taking the programme to Bille. He pledged to contribute in preparing Bille girls for a greater future.

She commended WIEN on starting the initiative with Bille girls, noting that “crucially, the Bille girl child grows in a typical oil and gas operations environment,” adding that “it is so welcoming and heart gladdening of WIEN’s conduct and conversion policy.”

She said: “The iconic restoration of hope in the almost emptied eyes of the Bille Girl Child has been removed at this instance is in tandem with the wise saying ‘Action and Conduct speak better than words’.”

All stakeholder groups that sent delegates to the occasion paid glowing tribute of WIEN for coming up with the laudable initiative.

WIEN is an association established in 2020 to provide a platform for Women that work across the Energy Industry value chain; to network and build confidence and links to progress their careers or businesses