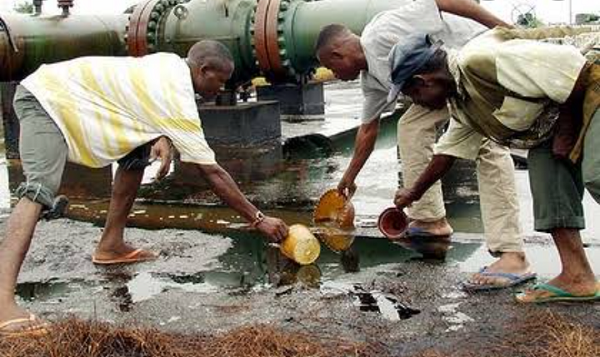 …In 2022, between January and April, the volume of crude stolen has risen to about 250,000 barrels per day putting the total loss at about $1,5bn

Oil theft has been a recurring menace in Nigeria’s oil and gas industry with negative devastation to human lives and economy of the country with no end in sight as perpetrators see the act as only means of making money not minding its adverse effects.

Recently, the city of Port Harcourt, capital of Rivers state, south-south Nigeria, was beclouded with soot, a black substance believed came from fossil fuel.  Nyesom Wike, the Governor of Rivers State attributed it to the menace of illegal bunkering and oil theft by unscrupulous elements. He led an operation with security operatives in the state to clamp down on illegal bunkering in their hideouts.

Many illegal refineries were discovered and burnt in that operation.

In a related development, at the Nigeria International Energy Summit (NIES) in Abuja, Abdulrazaq Isa, Chairman of Indigenous Petroleum Producers Group (IPPG), gave a vivid account of what indigenous producers have lost due to oil theft and its effect on Nigeria’s economy.

Crude oil theft has grown into a huge monster threatening the Nigerian economy.

On his part, Group Managing Director (GMD/CEO) of Nigerian National Petroleum Company Limited (NNPC), Mallam Mele Kyari, described oil theft as a national emergency on account of the proportion, dimension and sophistication it has taken in recent times.

The country is not reaping as much as it should because it is not able to meet its OPEC production quota.

Crude oil production has dropped to an all-time low of 1.29million barrels per day (without condensate). The addition of condensate brings Nigeria’s current production to 1.49mbpd.

A look at production figures from 2020 till date shows in stark relief how much of a monster the menace of crude oil theft has become. The average production in 2020 was at 1.77mbpd.

However, it would be recalled that 2020 was the year Covid-19 almost brought the world to a halt with virtually every country on lockdown. This saw the price of crude oil crashing to sub-zero levels with unprecedented demand dip. This development resulted in zero crude oil theft in Nigeria, obviously because the there was no market for the thieves to sell their stolen crude. This saw the country recording its highest production level of 2.49mbpd on 17th April, 2020.

According to Mallam Kyari, what that development showed was that Nigeria has the capacity to produce that figure (2.49mbpd) on any normal day because there was not special intervention of any kind that led to that peak production on that day.

Notwithstanding, as normalcy began to return and the price of oil began to experience a steady rise, the oil thieves began to step up their game and upstream operators began to experience production losses which have been growing since in almost direct proportion to the rise in crude oil price in the international market.

Explaining the situation recently, the GMD said it got to a point where, if you inject 239,000 barrels of crude oil into either of the Trans-Niger Pipeline or the Nembe Creek Trunk Line (these are some of the major pipelines that convey crude oil to the terminals for export), you will only receive 3,000 barrels. It got to a point where it was no longer economically sustainable to pump crude into the lines and a force majeure was declared.

The rate of oil theft kept increasing as the price of crude oil was rising in the market until March 2022 when there was zero recovery from all the volumes that was pumped into the line.

Another noticeable pattern in the trend of oil theft is that it is more endemic with Joint Ventures assets and those that belong to the Independents than with Production Sharing Contracts assets. This is likely because of the nature of the JV assets which are mainly onshore or in swamp/shallow waters. This makes the evacuation pipelines more accessible than those of the PSCs which are offshore and in deepwaters.

There is also a pattern in the way the theft is carried out. This can be discerned from the size of pipes inserted on the lines and the technology deployed in carrying out the insertion.

In some cases, the pipes inserted to steal crude oil from the lines are small and fitted in an amateurish way. This is an indication that those involved are small time criminals, more likely artisanal refiners who operate the slew of illegal refineries that dot the creeks of the Niger Delta from Akwa Ibom to Rivers, and from Delta to Bayelsa.

Some of the pipes fitted into the lines to siphon crude oil are big. In some cases, they are of same size with the pipeline or of the size that is used at the terminal to pump crude into vessels. A close look at them would reveal that they are professionally fitted with the use of cutting-edge technology. There have been cases where there are riser pipes were used indicating that the criminal deployed cranes. These cases indicate that the persons involved are not the regular illegal refinery operators but sophisticated and very knowledgeable criminals with access to vessels through which they ship the stolen crude oil out of the country.

The involvement of this last group is what accounts for the high volumes involved in the theft which has become an existential economic threat to the oil and gas industry and even Nigeria as a nation.

On the other hand, artisanal refiners and their illegal refineries have constituted a very grave danger to the environment and people of the host communities through the heavy pollution caused by their activities. This is beginning to cause soot in the atmosphere health challenges in some of those communities.

In terms of the financial loss to the nation, in 2021 the total volume of crude oil stolen is put at 200,000 per day. At an average price of $55 per barrel, the total loss was enormous (from January to December 2021).

Another way to view the virulent nature of the crime is to look at the rate at which the crude pipelines are breached with insertions. On a stretch of 20kilometers pipeline, there were 85 insertion points in three weeks!

The Trans-Forcados Pipeline, which is about the most reliable of all the land lines, is not spared. It records about 19,000bpd loss day. There are also case of sheer vandalism where the lines are blown out with explosives resulting in spillages and environmental hazard.

Another area where oil theft is affecting economy is the aspect of investment. It has slowed down the gains the Petroleum Industry Act (PIA) is supposed to bring about in the area of investment. Potential investors now ask how they can recoup their investment when crude oil is stolen.

With the twin menace of oil theft and pipeline vandalism assuming epidemic proportion, President Muhammadu Buhari has given marching orders to Chief of Defense Staff to lead a war against the criminals

All the security agencies have been mobilized to flush out the criminal element and restore normalcy.

In fact, the DSS and the Navy have already made some arrests.

NNPC has also deployed community-based security to monitor the pipelines while it is working on deploying technological tools for more effective surveillance and monitoring of the lines and facilities.

The Economic and Financial Crimes Commission (EFCC) and Nigerian Financial Intelligence Unit (NFIU) are also tracking movement of funds relating to the criminality.

While there is hope that all the measures that have been deployed so far will begin to yield results within the next two months, it must be pointed out that oil theft and pipeline vandalism are problems for everyone. Apart from the host communities that are directly affected by the environmental degradation, every citizen suffers the loss of national revenue when government does not have enough to provide social amenities and infrastructure to improve the quality of life in the country.

It is, therefore, imperative for all Nigerians to rise up against those behind crude oil theft and pipeline vandalism with a view to stamping them out so that oil and gas industry can yield the fullness of its benefit to the nation and the citizenry.

All hands must be on deck to fight this economic crime as the locals can support government’s effort by giving information where these criminals are located in their communities because they bear much of the brunt of illicit activities by the criminals.

While the military should take a further step to look inward on some of its personnel who have been accused of aiding and abetting oil theft.  Working together in progress, there will be positive result not only to stop these criminal activities but to add value to the country’s economy.