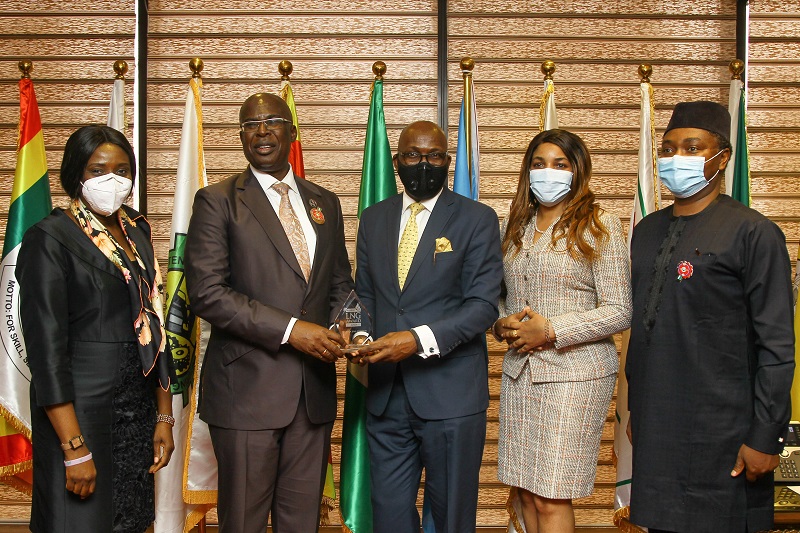 The Managing Director/Chief Executive Officer of Nigeria LNG Limited (NLNG), Engr. Tony Attah, has said the Most Outstanding Contribution in the Industry Award given to the Company at the recently concluded World LNG Virtual Summit and Awards is a testament to the deliberate commitment of the country to develop and monetise its vast gas reserves for the benefits of Nigerians.

He made the statement during recent visits to the Honourable Minister of State for Petroleum Resources, Chief Timipre Sylva, and the Group Managing Director of Nigerian National Petroluem Corporation (NNPC), Mr. Mele Kyari, to brief them on the award. The Managing Director was accompanied by Mrs Eyono Fatayi-Williams, General Manager, External Relations and Sustainable Development; and Mr Andy Odeh, Manager, Government Relations.

According to Engr. Attah, the Company was recognised, as a joint winner in a nomination group consisting of top LNG companies, for its growth strategy and for the bold decision by NLNG’s shareholders to proceed with the Train 7 project amid the COVID-19 pandemic.

He stated the Company was strengthened by the renewed commitment by the Federal Government to make gas a priority energy source for the country, adding that the decision to declare the “Decade of Gas” would further drive the zeal to monetise the country’s gas resources and, will ensure that Nigeria, through NLNG, has a major role to play in the energy transition.

“We are delighted to be recognised for our contributions. This award is very special; it has come in a year when we strived under the impact of the pandemic to sustain our business and to keep our people safe. 2020 is a year of many dimensions for different companies, but it has turned out to be a remarkable year on the back of our ambition to grow and increase our production capacity by 35% from 22 Million Tons Per Annum (MTPA) to 30 MTPA. This ambition led to our signing the EPC for Train 7 project in May 2020. Our ambition is coming to life,” he said.

Engr. Attah said NLNG’s passion for growth and its vision of “Helping to Build a Better Nigeria” has already earned NLNG the Thisday Company of Decade award, stating further that the Company was poised for the future with the support of the Honourable Minister of State for Petroleum Resources, and other major stakeholders.

He stressed that the country needs to be in the right position to capitalise on the gains of gas as a major energy source in the energy transition and called for accelerated development of gas resources before stiffer competition from renewable energy sets in.

He commended the Minister for major milestone gas projects during the year which included the declaration of the “Decade for Gas”, the AKK Gas Pipeline Project and the Autogas/AutoCNG scheme, stating that “gas is the future which is why we support the position that it is time to unleash the full gas potential of this nation. Indeed, the time for gas is now.”

Engr. Attah pledged NLNG’s continued support in the advocacy for gas utilisation in Nigeria through its Domestic LPG and Domestic LNG initiatives.