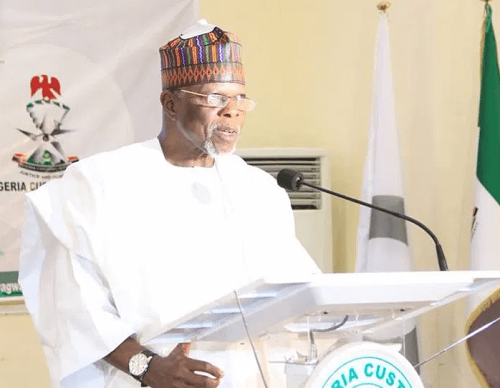 The Nigeria Customs Service (NCS) unveiled 18 patrol boats to curb the activities of smugglers using the creeks and waterways as safe haven for their illegal trade.

He said that the 18 creeks patrol boats, consisting nine logistic support boats and nine gun boats whose parts were armoured, should send clear signals to the criminals that “the game is up’’.

He said: “Unlike before, we now have boats with flat bottoms that can access the creeks even when the water has receded.

“The addition of these boats to the Service Marine arsenal at a time when more smugglers are running away from the heat on land to water is simply the right thing to do.

“This event no doubt marks the beginning of a renewed offensive against those who chose creeks and waterways as safe haven for their illegal trade.

“In-line with Executive Order on Local Content of 2017, NCS tapped into the ingenuity of a Nigerian Company, SEWA, to design, construct and build these edifices.

“As you can see, these boats are not only built with our weather and circumstances in mind, they can compete with similar ones built anywhere in the world.’’

According to the NCS boss, the relationship between NCS and SEWA represents excellent examples of what Nigerians can achieve when we come together.

“I therefore commend SEWA for delivering on their promise and have no hesitation to recommend them to individuals or organizations that need what they are capable of producing.

“As we commission these boats which will be deployed for the Southern waters, (the Eastern and Western Marine Commands), I urge our Marine Operatives to use them judiciously in the interest of the nation,’’ Ali said.

Ali, who also unveiled the Auto-Mobile Scanner at Onne Port, stated that the scanner would ease the activities of the service as it would scan not less than 20 containers within an hour and more than 480 containers in 24 hours.

He stated that Federal Government has plans to bring 135 Auto-Mobile Scanner to curb smuggling, demurrage in clearing of goods.

The comptroller called on well-meaning individuals and organizations to give the Nigeria Customs Service credible information that will enable interception and seizures of smuggled items.

He also called on the media not to relent on their valuable job of informing, educating and entertaining the public.

“Together, we will succeed,” Ali said.

In his remark, Murtala Mohammed, the Chairman of SEWA West Africa Limited, said that the unveiling of the SW27GB and SW23BC for the Nigeria Customs would help to facilitate their operations in the creeks and waterways in Rivers.

Mohammed said that the boats, built by SEWA West Africa Limited in Nigeria, were the Federal Government’s laudable achievement on the local content policy.

In his speech, Ian Appleby, the Managing Director of SEWA West Africa, said that all the boats were fitted with twin OBMs using environmentally friendly technology of 4-stroke engines.

Appleby stated that the boats fall into two class sizes 27ft and 23ft lengths and capable of reaching high speed for intercepting smugglers on the waterways.

According to him, the series V gun boat also comes with an upgraded hull for increased stability and forward aft deck drains.