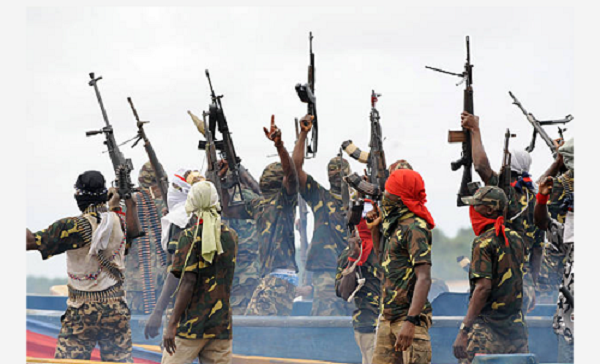 A new militant group in the Niger Delta region under the aegis of Bayan-Men may have blown up an oil facility operated by Nigeria Agip Oil Company, NAOC, in Ogba-Egbema-Andoni Local Government Area of Rivers State.

The group which blew up the oil well, OB5, (Obiavu-5) operated by Agip said their action was following the failure of the oil firm to deal directly with their host communities.

There has been panic in the area following the renewed attack on oil facilities owned by Agip in Omoku by the new militia group who said their interest was better to deal for their people.

The ‘General’ of the Bayan-Men in Port Harcourt, noted that their action was because has refused to allow the people to benefit from their operation in the area, adding that the firm was neck-deep in divide and rule.

The ‘General’ said: “The only thing we want Agip to do is to deal directly with the 27 communities of Omoku, according to the Federal Government resolution.

“We don’t want Agip to be negotiating with anybody. They should deal with the communities. If they continue like this, what we have done now is small to what we will do if they continue.

“They should not keep us together and treat us like one. They should treat communities individually.

“We are not joking. We are not interested in killing anybody. Our interest is that they must do the right thing else we will keep blowing up their facilities. We are giving them 24 hours to start the process of doing the right thing.”

Confirming the development, the Coordinator-General of Omoku Community Youth Leaders Forum, OCYLF, Comrade Ekeuku Pureheart, disclosed that the development was a result of the failure of Agip to adhere to the demands of the people.

Pureheart noted that the matter was simply for Agip to recognize the various communities that make up Omoku, adding that the boys were threatening to carry out more attacks if Agip does not do the right thing.

Pureheart said: “Federal Government intervened a long time ago. Now some uncontrollable boys and some militia groups have blown up Agip oil well, OB5. Obiavu-5 is the name of the oil well.

“The boys are still threatening that if Agip does not engage directly with the communities of Omoku and give them what is due them that they will do more.

“We are calling on the Federal Government and other relevant agencies to intervene before things get out of hand. This may cause a drop in production. The government does not need any situation that will result in to further drop in production to occur.

“The group is saying enough is enough. Agip is working with few individuals in Omoku to oppress the people and the boys are saying they will no longer take that.”

He noted that Agip was still struggling to put out the ravaging fire on the facility.

Pureheart: “Agip is already there trying to bring down the flame. They are there with firefighters to bring the fire under control.

“The group is saying that Agip should deal with individual communities that is what the law provides. Omoku is a cluster of communities. And the law says when you reach any land treat them differently and give them what is due them.”

“They should adhere to FG resolution of February 27th, 2021, and that agreement must be implemented in line with the Petroleum Industry Act. We are urging the FG to stop up to ensure that the agreement is implemented in full.”

There is apparent apprehension as it is not yet known if the military will respond to the attack by this new militant group.