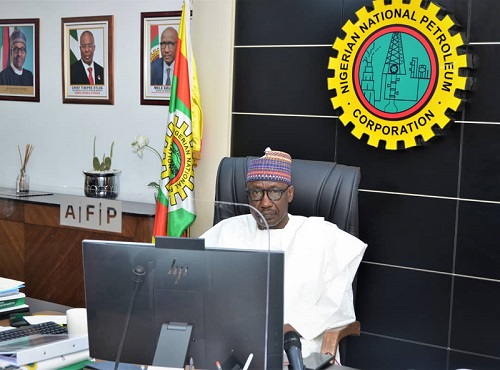 …Recent IOCs divestment in Nigeria is a clear indication that the world is gradually moving away from fossil fuel with current realities of energy transition.

The Nigerian National Petroleum Company Limited (NNPC) has called on members of the Independent Petroleum Producers Group (IPPG) to recommend new strategies to tackle the challenges facing the Nigerian oil and gas industry.

The Group Managing Director (GMD) and Chief Executive Officer of NNPC, Mallam Mele Kyari, gave the charge while hosting the new executives of IPPG in his office at the NNPC Towers, Abuja.

The NNPC said that the current reality in the petroleum industry calls for a clear understanding and commitment of all players in order to reposition the industry for enhanced performance.

According to the GMD, although the Petroleum Industry Act (PIA) has eliminated the uncertainty and lack of clarity that have bedeviled the industry in the last twenty-five years there was need for practical steps that players in the industry to redress the situation.

The GMD submitted that “there are immediate problems and challenges which we know, security is a major issue, crude theft is a major issue which is connected to security, there are vandals and thieves. Without mincing any words, we find ourselves in this situation because everybody failed. There is no exception from NNPC to all of you (operators) to government, security agencies, communities and everybody failed and this is where we found ourselves.”

“We have to bring back every one of us back on the table to accept this reality and come up with an intervention that is different that is not what we have always done so that we can get this back on the table.”

He disclosed that significant progress has been made in reducing the incidences of crude oil theft and called for hands to be on deck to work towards eliminating the menace.

On gas pricing, the NNPC helmsman said though the country was undersupplied, the PIA has created an enabling environment for producers to recover their cost through a flexible structure that has been put in place by the government.

Speaking earlier, Alhaji Abdulrasaq Isa, Chairman of IPPG which is a group of indigenous oil companies operating in the upstream sector commended the GMD for his role in the passage of the PIA and his appointment as the CEO of NNPC Limited.

Isa said as a limited liability company under the Companies and Allied Matters Act (COMA) the new members of IPPG can engage for both parties to learn from each other.

According to the Chairman of IPPG, “we clearly applaud the passage of the PIB and we think it is going to lead to the growth and development of the industry. Particularly, the key elements of it which is to improve fiscal terms, creation of key industry regulations, commercialisaton of the NNPC, establish host communities trust. These key elements of it are critical to the future development and growth of the industry. I believe with the leadership of the NNPC, these aspirations as stated by government, we believe is realizable.”

In another development, the GMD called on stakeholders in the oil and gas industry to quickly provide solutions to the challenges of the industry before crude oil loses its relevance.

He made this call when he received a delegation of the Presidential Amnesty Programme led by interim Administrator Colonel Milland Dixio Dikio (rtd) describing energy transition as a phenomenon that poses serious challenges to countries endowed with fossil fuels.

Kyari observed that there is need for all stakeholders to collaborate and ensure that smooth transition to cleaner energy resources is achieved.

“If we don’t do anything quick to resolve our issues and exploit the resources that are available in another ten years time nobody will come and look for the oil. This is where we are heading to and there will be nothing to worry about probably ten years time because people will go to where oil is produced in the cheapest manner without any distraction. When people sense that when they come into your country they will have no peace, the safety of their assets are not guaranteed they will not come.”

He cited the recent divestment efforts by some of the International Oil Companies (IOCs) operating in Nigeria which is a clear indication that the world is gradually moving away from fossil fuel in the wake of the current realities of energy transition.

He sought the collaboration of the Presidential Amnesty Programme in ensuring lasting peace in the Niger Delta area and mutual understanding with the various host communities which the NNPC operates.

Dikio said the group was in the NNPC to seek for areas of mutual collaboration that will help to safeguard the nation’s critical oil and gas infrastructure.

He also called on the NNPC Limited to partner with his team build the capacity of former agitators in a manner that will ultimately provide business opportunities and economic development in the Niger Delta.

Dikio stated thus, “In the spirit of oil assets distribution to seek the assistance of the GMD in addressing some of the concerns, we believe that if the ex-agitators knew how to disrupt oil production that energy can be positively used in securing those assets.”