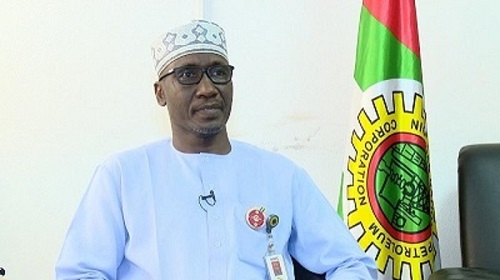 Mr Mele Kyari, Group Managing Director, Nigerian National Petroleum Corporation (NNPC) has allayed fears of any hitch in petroleum products supply following reports of resurgence of queues in some parts of the country.

The GMD also explained why Nigeria is demanding for energy justice at the ongoing United Nations Climate Change Conference (COP26) in Glasgow, Scotland amidst the global push for energy transition.

Kyari spoke on Tuesday at the Association of Energy Correspondents of Nigeria (NAEC) 2021 Strategic International Conference in Lagos.

The conference had as its theme: ‘Petroleum Industry Act: Energy Transition and the Future of Nigeria’s Oil and Gas.’

Kyari said NNPC’s objective was to provide energy security for Nigeria and ensure availability of petroleum products in the country.

He said: “As we speak now, there is speculation of fuel scarcity within the media but we have over 1.7 billion litres of Premium Motor Spirit in the country.

“We have another 2.3 billion litres coming in so there is no shortage in supply as being speculated.

“Of course there are issues about pricing at some depots but government has no plan to revise the pricing structure.”

Kyari noted that the COP26 again highlight the challenges faced by Nigeria and other African countries in the global energy transition.

He said President Muhammadu Buhari in his speech before the world leaders had demanded for energy justice for the continent and the need to exploit the available resources as a pathway to attain the net-zero carbon objective by 2050.

The NNPC boss noted that though Africa accounted for only about three per cent of the global carbon emission, the continent still had the responsibility to join the world in combating climate change.

According to him, Nigeria has identified its abundant gas resources as its fuel for energy transition which informed the declaration of the Year 2021 to Year 2030 as the Decade of Gas by the government.

Kyari said: “We are making good progress in terms of the implementation of the PIA which is clearly creating the path for transition.

“There is no way we can achieve this feat without adequate infrastructure to transport the resources to where it will be used and that is why we are investing in massive gas infrastructure.”

He said the projects include the Obiafu-Obrikon-Oben (OB3) and the Ajaokuta-Kaduna-Kano pipelines which would deepen gas utilisation in the country.

The Conference Chairman, Mr Biodun Adesanya, lauded the setting aside of 30 per cent of the profit of the Nigerian National Petroleum Corporation for exploration activities in the frontier basins in the PIA.

Adesanya said the discovery of oil and gas resources in other areas apart from the Niger Delta was a welcomed development which should be pursued with vigour by the country.

He however called for the appointment of competent personnel to manage the sector, noting that this was the only way Nigerians could benefit from the country’s abundant oil and gas resources.

Also, Mr Simbi Wabote, Executive Secretary, NCDMB, said the passage of the PIA has opened a vista of opportunities for the industry.

He added that it would also stimulate the much-needed investment to the oil and gas industry.

Earlier in his address of welcome, Mr Olu Phillips, Chairman, NAEC, said statistics showed that more than 100,000 people die annually in Nigeria as a result of indoor inhalation of waste gases.

Phillips said this informed the global energy transition, adding that the Nigerian government was responding with the focus on optimal utilisation of the country’s gas resources.