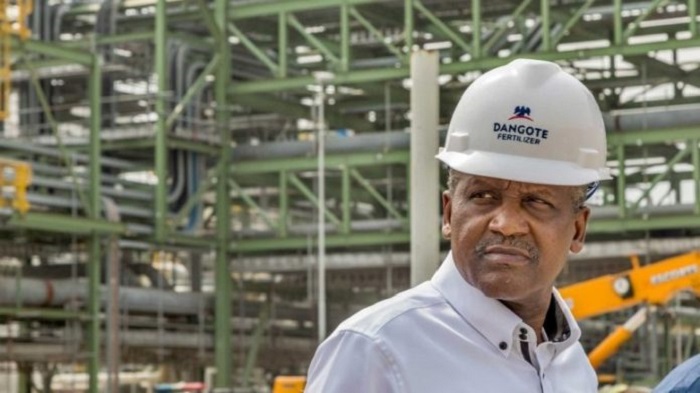 In December 2019, an ambitious refinery project in the remote Ibeju-Lekki suburb of Lagos, Nigeria, took delivery of the world’s largest single crude distillation column, too much fanfare.

After years of hopes and delays, Aliko Dangote’s 650,000 barrels a day refinery – one of the world’s second biggest – is due to start operations in just over a year’s time.

Government officials and citizens are united in the hope that the Dangote refinery complex, which will also produce fertilizer and petrochemicals will do for Nigeria’s stalled economy something comparable to what signing a 26-year-old Cristiano Ronaldo would do for a premier league team facing relegation.

The Nigerian government’s well-documented import substitution policy direction has Dangote Refinery front and centre of it.

Once onstream in early 2021, the refinery on the coast of Lagos is expected to reverse the decades-old system of exporting crude oil and importing refined petroleum products such as gasoline, diesel and lubricating oil.

This should ease pressure on the naira by freeing up some $8.7bn used to import refined petroleum products each year as well as create jobs in services and manufacturing around the project.

The real estate boom around the refinery points to the optimism about the project. It is meant to be a catalyst for local development plans in the Ibeju-Lekki area such as a new international airport, a deep sea port and a free trade zone.

Despite the positive sentiment towards the refinery however, few people have tried to calculate the measurable impact of the refinery on Nigeria’s economy and the Ibeju-Lekki area in particular.

How far will the refinery cut Nigeria’s fuel import bill and boost exports? Beyond the cash, what will be the effects of siting the new nexus of Nigeria’s downstream petroleum industry in a fast-growing and densely populated area of the country’s commercial capital?

Andrew Alli of SouthBridge believes the savings in foreign exchange from importing oil products would be more limited than many expect.

IS THE REFINERY A CURE-ALL?

To understand why Dangote’s Refinery may not deliver the hoped-for structural changes, we must first run through the basic figures that tell the story of Nigeria’s trade balance and its internal petroleum consumption:

Using the standard measure of 47% petroleum motor spirit (PMS) per 159-litre barrel of crude oil according to the U.S. Department of Energy,

This means that Dangote’s Refinery must process about 471,500bpd to satisfy Nigeria’s internal demand.

WHAT HAPPENS TO EXPORT EARNINGS?

The problem is that if the feedstock for Dangote’s refinery comes from local oil production, as the chief of the state oil company has promised, then it will eat into Nigeria’s export cargoes and revenues.

The 2019 average international crude oil price was $64 per barrel.

If the refinery satisfies Nigeria’s internal demand, it would save over $8.7bn. That’s how much the country spent on fuel imports in 2017.

That sounds great, but what about the opportunity cost? By allocating over 470,000 b/d of locally-produced crude oil to the refinery, the state oil company is losing about $11bn of forex earnings a year. That’s almost a quarter of the country’s current forex earnings. Nigeria would be losing $11bn to save $8.7bn.

THAT’S NOT THE END OF THE STORY

Ending that system would mean that the estimated $3.85bn paid to subsidise fuel in 2019 would be saved.

Adding the import savings and the subsidy savings would mean total savings of $12.55bn – slightly over the estimated $11bn of lost forex earnings.

There are still policy options which could mean the Dangote refinery would radically change the state’s finances.

The Dangote Refinery could pay for its 650,000 b/d feedstock from Nigeria at the international market price and in foreign exchange.

That would mean it would be paying over $15bn a year in raw material costs alone.

That exceeds the stated construction costs of the refinery and is more than the net worth of Dangote, still the richest man in Africa.

The other option is more radical still and would require a determined policy shift in government.

Nigeria could boost its crude oil production by 650,000 b/d, supplying all the increase to the Dangote refinery.

Then it could export all 2.03mn b/d of crude to its foreign customers and retain the forex without having to budget for fuel imports.

This would be within the OPEC rules – the cartel’s limits on production do not include crude allocated to local refining nor do they govern exports of refined products.

This would allow Nigeria to use all its OPEC quota for exports and at the same time meet all its local needs for petroleum products, then would be able to export over 100,000 b/d of refined products for forex to the region and beyond.

That would be a game changer. And would be in a different league from the estimated savings of $1.5bn a year under the current financial structure.

The tough question is whether Nigeria could possibly ramp up local crude production by 650,0000 over the next five years.

No question that it would be technically possible. The NPPC insist its medium-term target is 3mn b/d production.

But while Nigeria has the reserves to sustain 4mn b/d but it hasn’t made the necessary investments. Lining up the deals and the new partners – whether China, India or western IOCs such as Shell or Exxon – could take five years alone.

It is also highly significant that there has been no public discussion of a credible way for Nigeria to boost local production to maximise the benefits of the refinery project.

HOW WILL DANGOTE MAKE MONEY FROM THE REFINERY?

In the absence of any discussion about coordinating strategy, we are thrown back on the tricky but vital question for Dangote – how can the refinery make a profit?

It may be that the refinery could end up being subsidised by the government – an accusation that has trailed Dangote’s rise to business supremacy.

For example, if the refinery is guaranteed 650,000 barrels per day at a fixed and favourable (naira) price, there is nothing stopping it from satisfying the local consumption quota, then selling the extra circa 179,000 bpd worth of product to buyers anywhere in the world – at higher international prices.

In other words, Nigeria could end up exchanging a corrupt and opaque fuel subsidy programme that purports to assist ordinary Nigerians with a hidden corporate subsidy that assists a multibillion-dollar business entity.

ONE HALF OF THE BIGGER PICTURE

Ibeju -Lekki’s Infrastructure Problem – Another Elephant in the Room

Speaking at the Offshore Trading Logistics Expo in October 2019, Dangote Group Executive Director, Devakumar Edwin said there was no plan for refined products to be moved to market around the country by rail.

According to him, a transport solution made up of “shuttle boats” and expanded road networks would do the trick.

This implies the existing traffic nightmare and safety hazard – thousands of 40-ton 12-wheeler road tankers loaded with 33,000 litres of petrol – will simply be moved from Apapa Port and Port Harcourt to the Lekki corridor, on the eastern flank of Lagos.

The Lagos State government says it has plans to build a “7th Axial Road” linking Ibeju-Lekki to the Benin-Sagamu Expressway, so as to bypass the residential Lekki-Epe corridor.

For example, 12 years into what was supposed to be a 4-year project, only 30KM of the 49.4km Lekki-Epe expressway has been completed.

As at 2013, 15KM was completed at a total cost of about N50bn ($423m), whereas the entire project was initially projected to cost $460 million (54.2bn), meaning that as much as 70 percent of the initially proposed project sum was spent constructing only 30 percent of the project.

Further information on money spent on the road since 2014 is obscure. Lagos State has refused to open its books to scrutiny, even after a 2017 Appeal Court ruling held that all Nigerian states must abide by the provisions of the Freedom of Information Act. Exactly how much it has spent on the still-uncompleted expressway is anyone’s guess.

Against this background, the idea that the proposed 7th Axial Road intended to rescue Lekki from its impending tanker traffic doom will magically come into into existence between now and the refinery’s January 2021 opening date is fanciful.

Instead it looks likely that the Lekki-Epe expressway will become ground zero for an unwelcome and terrifyingly dangerous new tanker traffic problem, which is currently confined to Lagos Mainland.

One of the very few decent and affordable residential districts in Lagos is about to follow Apapa – a once prosperous middle-class Lagos neighbourhood that has deteriorated over the past two decades into a miasma of degraded infrastructure, burnt out vehicle carcasses and fallen shipping containers.

If the trucks do not have an alternative route, it will spark an inevitable demographic and capital flight Lekki will suffer as thousands of road tankers tear a predictable path of accidental infernos and human misery en route to the Nigerian downstream oil industry’s new Mecca.