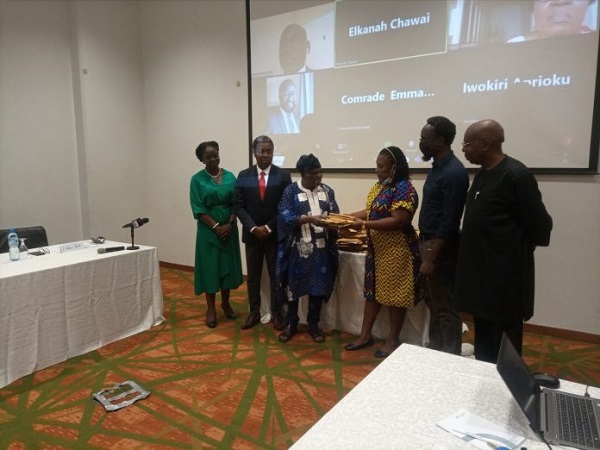 Two hundred and eighty seven poets are competing in the 2022 edition of The Nigeria Prize for Literature, sponsored by Nigeria LNG Limited, NLNG.

At a ceremony in Lagos, the entries received were handed over to the panel of judges by the Chair of the Prize’s Advisory Board, Professor Akachi Adimora-Ezeigbo.

The Advisory Board also handed over 87 entries for the NLNG’s Prize for Literary Criticism.

Professor Sule Egya leads the panel of judges. A professor of African Literature and Cultural Studies at Ibrahim Badamasi Babangida University, Lapai, Niger State, Professor Egya is a renowned poet and novelist who writes under the pen name E. E. Sule. Professor Egya has written over one hundred scholarly articles and literary essays. His first novel, Sterile Sky, won the 2013 Commonwealth Book Prize for the Africa Region. His poetry volumes include What the Sea Told Me, which won the 2009 ANA/Gabriel Okara Prize.

Other judges are Toyin Adewale-Gabriel and Dike Chukwumerije. Adewale-Gabriel is a Poet and narrator. She has worked as a literary critic in The Guardian, Post Express and The Daily Times. She is often described as “the most beautiful and outstanding voice of the new African poetry.” Dike Chukwumerije is a Nigerian Spoken Word and Performance Poetry artist and an award-winning author. He has published several books and is the brain behind Night of the Spoken Word, a live Poetry show and a theatre production, made in Nigeria Poetry Show. He is also the winner of 2013 Association of Nigerian Authors (ANA) Prize for Prose Fiction.

Speaking at the hand-over ceremony, NLNG’s General Manager for External Relations and Sustainable Development, Mr. Andy Odeh, said some significant strides have been recorded in the Nigeria Prizes. He said NLNG recently launched the website – www.thenigeriaprizes.org –a one-point information hub for the Prizes.

“This site served as the submission portal for entries received this year. Our goal with this new gateway is to make information about the Prizes, process, governance, and winning works and winners readily available to members of the public. Also, based on feedback from various stakeholders, this year, the Advisory Board appointed two judges that are practitioners, not from core academia. But be assured that their credentials are solid and they speak to their craft and contributions to the Literary World,” he added.

In her remarks, Professor Adimora-Ezeigbo, urged the judges to use the opportunity to put Literature on a pedestal and make it an enabler of development in the country.

Other members of the Advisory Board are Prof. Olu Obafemi and Prof. Ahmed Yerima.